The Bell Museum of Natural History, located at the University of Minnesota and founded in 1872, is the state of Minnesota’s natural history museum. As such, it is the leading institution in providing specimen-based documentation on the full spectrum of Minnesota’s biodiversity. In 2015, MSI began to work with the Bell Museum to develop a centralized, online web resource that makes available an extensive set of specimen-based data (over 190,000 records) and imagery (over 30,000 high-resolution digital photographs) from the Bell Museum and data from their agency partners and collaborators.

How we worked with the researchers
Curators of digital data at the Bell Museum contacted MSI with the goal of migrating their collections from various disparate repositories into a single database with a public portal. They had identified the Symbiota platform (http://symbiota.org/docs/) and had dedicated funding available for MSI developers to customize an instance of it to handle their multi-kingdom specimen data. MSI also added features to allow them to import their data from each of their current repositories. 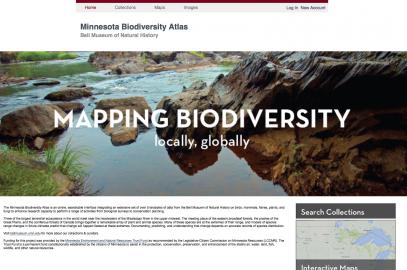 On May 18, 2016, the web portal went live. Visit the Bell Museum Diversity Atlas.