In 2004, the U.S. Department of Homeland Security established the National Center for Food Protection and Defense (NCFPD), headquartered at the University of Minnesota. (In September 2015, the Center was renamed the Food Protection and Defense Institute (FPDI).) One of the agencies with which FPDI works is U.S. Customs and Border Patrol, (CBP) which monitors shipments of food into the U.S. MSI was contacted by FPDI to develop tools that they could use to store and analyze this data.

How we worked with the researchers
Researchers at the FPDI described the problem and had created a mockup of the desired interface to explore their data when they first approached MSI. The FPDI had some dedicated funding available for MSI developers. After some initial meetings to define the scope of the project and understand the data, MSI staff met monthly with FPDI staff to evaluate each iteration of the interface. 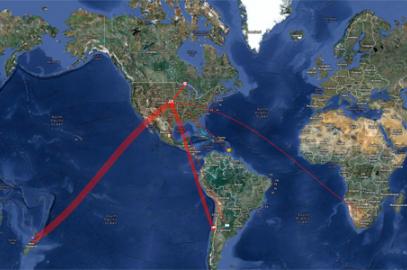 MSI created a database to store the CBP data and a tool to automatically import new data. A private web interface was developed that allows FPDI researchers to select and perform statistical analyses on selected datasets using their own algorithms. The interface generates plots and other summaries. Visualizations of imported food was accomplished using the Google Maps API. Researchers can select countries and food products to see what is entering the country. They can view entry to specific ports or the view can show a single connection to the country exporting the food with a line thickness proportional to the weight of the imported food. The graphic shows importation information for apples.